In November 2016, Samsung released the Gear S3 Classic and Gear S3 Frontier at the IFA trade show in Berlin. Since there are two new models, you are probably wondering what the differences are between the two watches.

Both the Samsung S3 Classic and Samsung S3 Frontier are available in two variants, an LTE model and a non-LTE model. However, the Gear S3 Classic released alongside the Frontier in 2016, had no LTE support. Samsung later released a newer version of the Samsung Gear 3 Classic with support for LTE, in May 2017.

With the hype for a smartwatch being more prevalent than ever, Samsung Galaxy has a lot to live up to on their latest galaxy watch, especially with the popularity of their predecessor, the Gear S2. With both models providing a unique set of features and styles, which of these watches is right for you? Let’s find out with our Samsung Gear S3 Frontier VS Classic side-by-side comparison.

The Samsung Gear S3 Frontier has a sturdy exterior design, which pairs nicely with the standard rubber strap. Although there are other strap options, the default one compliments the design of the watch and accentuates the Gear Frontier’s ruggedness.

Both smartwatches are made of stainless steel, which is an excellent choice for a smartwatch. It not only gives the watches a weighty and premium feeling but looks stylish when coupled with Samsung’s classic rotating bezel design. Both watches have buttons on the right side of the watch, yet only the Frontier buttons are textured. The buttons on the Gear S3 Classic model are smooth and sleek looking.

The slight variations in design between the two models of Samsung Gear S3 don’t have a significant effect on the smartwatch. Although the textured buttons on the Frontier are more suitable for a fitness enthusiast, the design of the Gear S3 Classic might be preferential for those who prefer a simple, yet elegant looking design.

If you want to learn more about what a smart watch does, check out our article here for what does a smartwatch do. 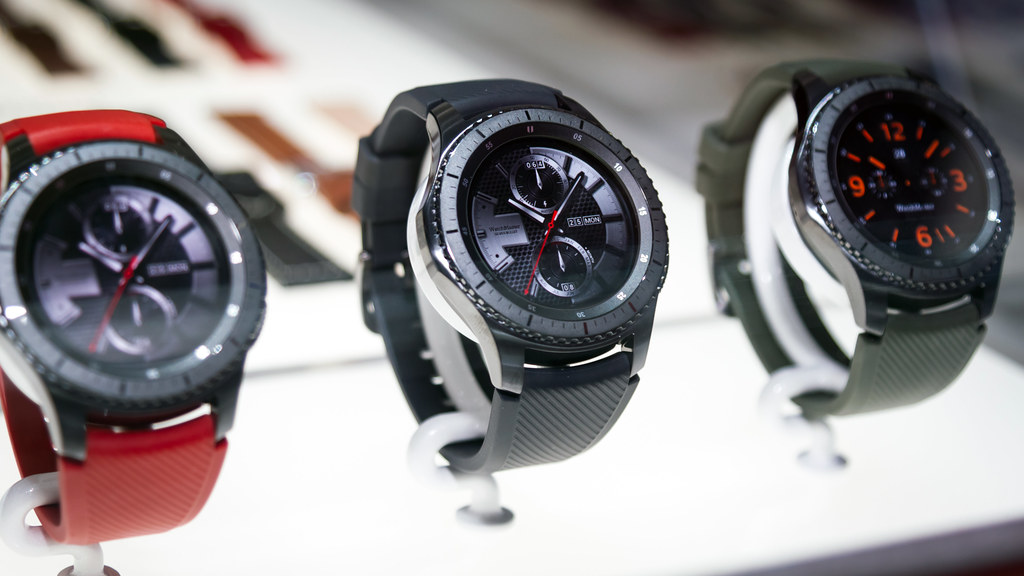 The dimensions of both Samsung Galaxy Gear S3 watches are identical, with the only difference being that the S3 Frontier is slightly heavier.The Samsung Gear S3 Frontier weighs 63g, while the Classic only weighs 59g. While this difference isn’t all that noticeable, Samsung’s competitor, the Apple Watch Series 3, weighs only 52.8g.

The dimensions and weight of the watch are fairly average, and while the stainless steel build makes the watches look nice, it also feels smooth and weighty. This feels nice when worn on your wrist.

The size of the display on the Samsung Gear S3 Classic and Samsung Gear S3 Frontier comes in at 1.3 inches. Although this is relatively standard for a smartwatch, the watches have a resolution of 360 x 360 pixels and a pixel density (PPI) of 278. With the use of Samsung’s Super AMOLED displays, the display quality on both watches looks sharp and vivid and are an impressive part of the watch. The watch also features an always-on-display, allowing you to showcase your chosen watch face with style.

Both models of the Samsung Gear S3 Watch also use Corning Gorilla Glass SR+, which helps protect your watch from accidental drops and scratches. Having this feature alongside the IP68 water-resistant rating present on both watches protects against dust and water and makes for a versatile watch, suitable for any situation.

Samsung’s Gear S3 watches are both using a Tizen-based operating system, their very own Tizen OS. While some argue that Wear OS is a preferable choice for smart watches, Samsung prefers to stick with its OS and proprietary app choices. This is much like their adversity to using stock android on their smartphones. This isn’t a bad thing though, although using Wear OS does have its benefits, like added compatibility with Google-based apps, Samsung has a host of its own apps, including their fitness app S Health, which will be explained more in this Gear S3 Review.

With the use of Samsung’s accurate GPS, both watches are suitable for runners, hikers, and various other fitness-related activities. The S Health apps provide advanced fitness tracking capabilities, including the option of monitoring your sleep, counting calories, and measuring your heart rate. While both watches are IP68 rated, neither of them are suitable for swim tracking, unlike the Fitbit Charge 3 which is water-resistant up to 50 meters. Details about the Fitbit and its other features can be found here.

Samsung Pay is another unique feature that works on both watches. Samsung uses NFC on their watches to allow you to turn your smartwatch into a mobile payment system, which is great for those on-the-go purchases. 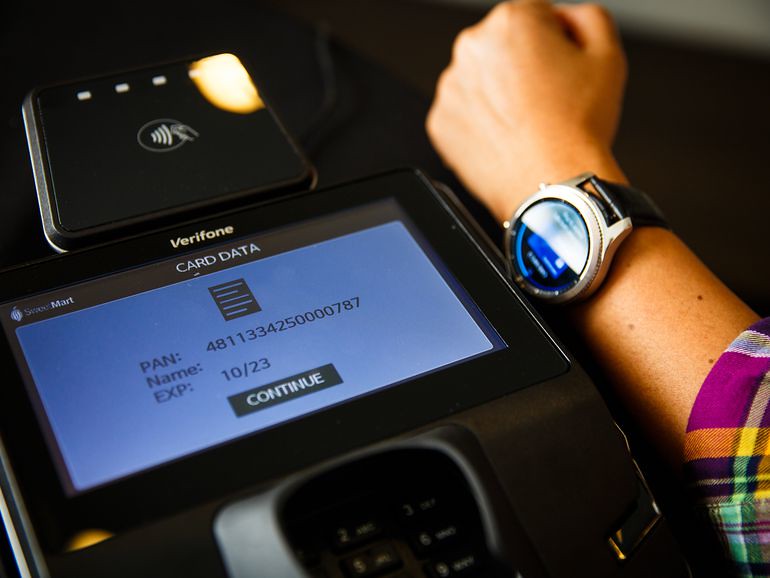 Both the S3 Classic and S3 Frontier use the Galaxy App Store, where countless apps can be downloaded and used on your watch. You can also personalize your watch with various watch faces, to add your personal touch to your smartwatch.

The battery life on the Gear S3 Frontier VS Gear S3 Classic is reasonably good, offering up to 72 hours with mixed usage. This is much better than what is offered on the Apple Watch Series 3, which can get up to only 18 hours, depending on the usage. Wireless charging is also provided by Samsung for their Gear S3 watches, charging up to 50% in an hour, in a stylish and convenient way.

Both watches now offer an LTE option, although not everyone will utilize the need for it. While your watch is paired to your phone via Bluetooth or Wi-Fi, you are able to make or receive calls. If you own an LTE standalone model, you can do this without it being paired to your smartphone. For a full list of the best standalone smart watches, check out our article here.

Gear S3 Classic was originally priced at $349, which is on the high end for smartwatches. In comparison Gear S3 Frontier was slightless more affordable at $299. Depending on whether you want new or used condition or a model that supports LTE, the prices do vary between different retailers. Since their launch, both models can be found for cheaper on retailers like Amazon now, so be sure to check out the latest price for yourself.

If you are looking to buy a watch that isn’t as expensive, but don’t want to sacrifice any key features, the Ticwatch E is a fantastic solution to the problem. On price alone, this watch can rival the Samsung S3 watches. However, this watch has a hefty frame and isn’t what some might consider premium-looking. If you can overlook the physical aspect, the watch is packed full of features and can be found here for slightly less than Charge 3. Read our review of the Ticwatch E here.

While the Gear S3 Frontier Samsung VS Classic Samsung Gear S3 have many similarities, there are some refined differences between the two. Although both watches could function as a sports watch, due to the same tracking features and water resistance, The S3 Frontier’s rugged design and textured buttons may help you use the watch more easily while exercising.

The S3 Classic, on the other hand, has a more standard and elegant design, making it aptly named. If you are looking for a watch that blends in more with your everyday outfit or prefer the sleeker-looking design, then the S3 Classic is probably the one for you.

The Gear S3 Classic is somewhat lighter, which may help with portability for those with smaller wrists, but realistically, these watches don’t differ that much from each other. The only key difference that isn’t physical is the difference in price. Although the difference in price between the two is now a lot less than the original RRP, there is still a difference, which may be the deciding factor since the specs are almost identical.

The bottom line is that both Gear watches offer the same essential features, so telling them apart by functionality alone isn’t a good comparison. It’s best to choose your watch based on which design you find preferable, which has been covered in this Samsung Gear S3 Classic versus Frontier review.

Fitbit vs. Garmin: How do the best two fitness brands compare?

Samsung Gear S3 review: did Samsung let us down?

Ellie is an accomplished writer with over 3 years of experience writing about technology, with a passion for creating compelling content about wearable gadgets. She lives near Bristol, UK.

Suunto vs. Garmin: Choosing Between the Best GPS Watches

Ticwatch E Review: A Robust Wear OS Watch We Could All Afford